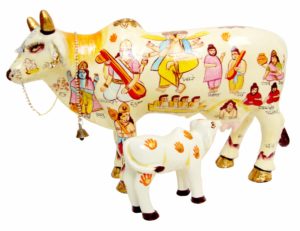 The sacred vedic scriptures define kamdhenu as the ‘mother of all cows’. This bovine goddess is also known as ‘surabhi’. she is believed to fulfil every worldly wish of her worshipper. She is also believed to be the mother of eleven rudras. The iconography of goddess kamdhenu depicts her as a white cow with the head and breasts of a female. This head has two horns. the goddess has the tail of a peacock and colorful wings of an eagle in some pictures, in other pictures, she has the tail of a cow. This devi has many deities present on every part of her body. You can find brass idols of goddess kamdhenu with beautiful engravings all over her body. The details of these etchings will never fail to amaze you. You can buy kamdhenu cow through reliable online merchant sites in india.

There are many descriptions regarding the birth of goddess kamdhenu. The hindu puran identifies lord brahma as the creator of kamdhenu. She was created to produce and offer ghee to agni/fire during religious hindu ceremonies. Some hindu scriptures believe this sacred cow had emerged from the ‘kshira-sagar/ocean of milk’ during samudra manthan/churning of ocean. The gods presented this cow to seven sages after her emergence. the hindu epic ramayana identifies sage vashista as the only keeper of kamdhenu.

The picture of goddess kamdhenu has deities placed all over her body. Every part of her body is sacred due to this reason. Her horns symbolizes the gods. Her face represents the sun and moon. Her shoulders represent ‘agni/god of fire’. Her legs represent the himalayas. The four purusharthas, known as dharma, artha, kaam and moksha, are believed to reside in her legs. Her sacred body is believed to offset the negative energies from the surrounding area. An idol of goddess kamdhenu will dispel all misfortune from your house. You need to buy an online kamdhenu cow from an authentic merchant to revel in her blessings.

The sacred body of goddess kamdhenu is believed to be the abode of all hindu deities. You can receive the blessings of all deities if you worship this goddess at your home or in your office.
1. Lord hanuman resides in her tail. he will dispel the negative energies from the surrounding area.
2. Goddess lakshmi also resides within her body. She will bring prosperity and good luck in your life.
3. Goddess ganga also resides within her. She will purify your house and soul of the dwellers.
4. Lord shiva is believed to reside in her head. He will revive your faith in morality and instill confidence.
5. The lord of fire/agni resides in her stomach. You will receive energy and charm as blessings from agni.